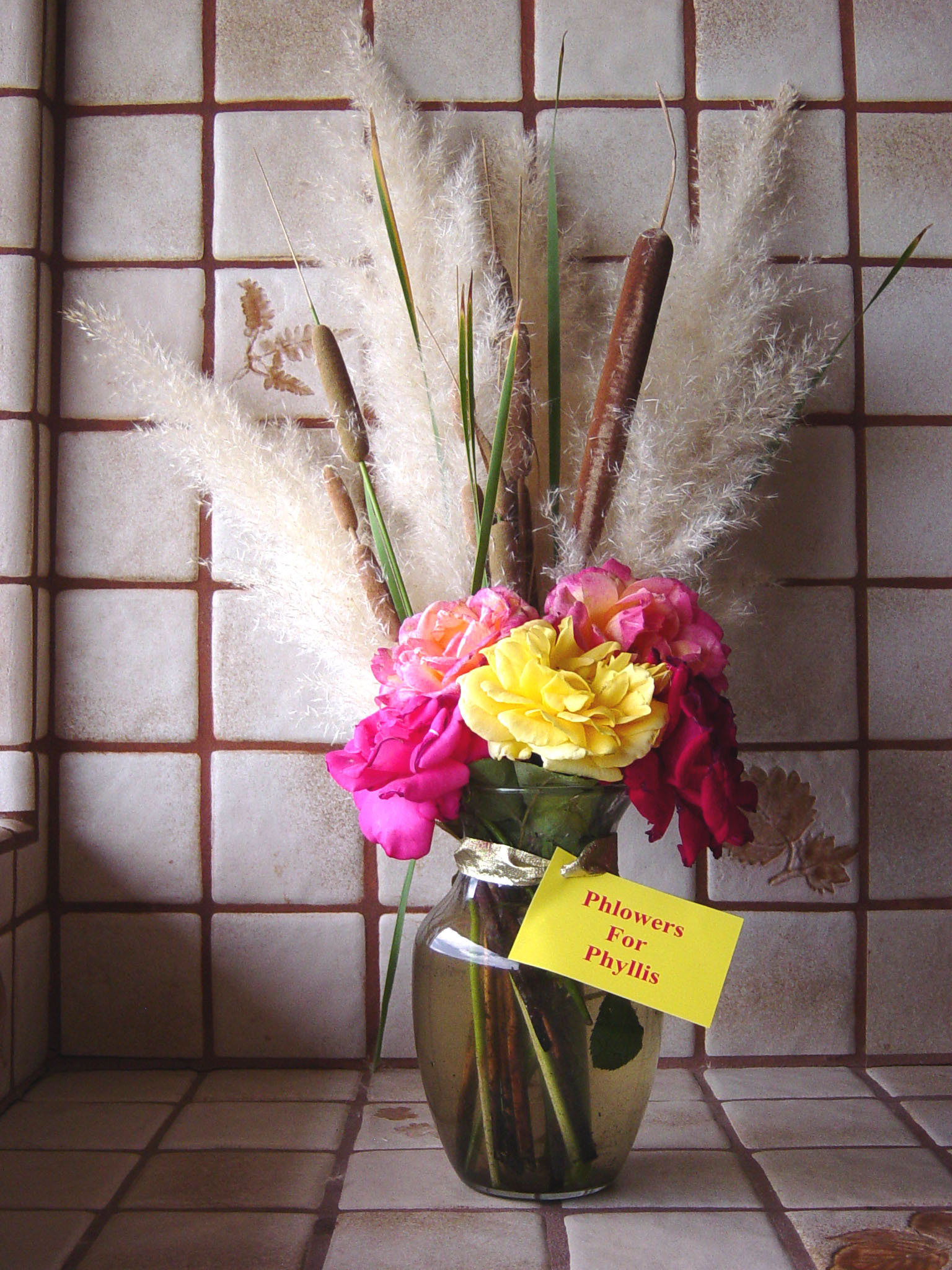 For quite some time as an ongoing thing I made bouquets for Phyllis from the flowers and greenery and native growth in our yard.

Last fall, two or three months before Phyllis died, I made her an especially nice bouquet composed of roses of three different colors, red, yellow and pink, with a little filmy greenery thrown in to set off the rose colors.

I put the bouquet in a narrow necked vase and then I made a label on the word processor, with red letters on a yellow background. The label read “Phlowers for Phyllis,” and I tied it with a yellow ribbon to the neck of the vase.

I presented it to her and she was quite happy and appreciative of it. In a few days the roses started to wilt as roses will do, so to preserve the usefulness of the vase and the label. I discarded the roses and replaced them with a mix of native (to our yard) growth. This growth consisted of Pampas grass plumes, Cattails, some green shoots from the Cattails and a little greenery from the cedar trees. I called this the autumn display.

This autumn display sat on the sink board by the window for quite some time. It was a long lived display, One day it disappeared and when I noticed that it was gone, I thought “some of my helpers probably threw it away.” I thought “Oh well, It WAS getting old.” I let it go at that, although I felt bad about losing the “Phlowers for Phyllis label” which I though was kind of cute even if I had made it up myself.

Yesterday Linda and I were looking for a place in the utility room to put our new backup computer and I noticed that on the counter there was a narrow necked vase with Pampas grass plumes and cattails in it. I mentioned it to Linda and she said “Oh, we couldn’t throw that away.” So, the vase and label and the several months old autumn display were intact. I decided to, with Linda’s help, rebuild this display with a combination of the original tri colored roses and the original autumn display together, using new stuff from the yard, Then I would get Linda to photograph it, and attach the photograph to this writing as a token of the little things that I had done over the years to show my love for Phyllis, and now in her decline, continued to do to try to make her waning life a little more bearable.