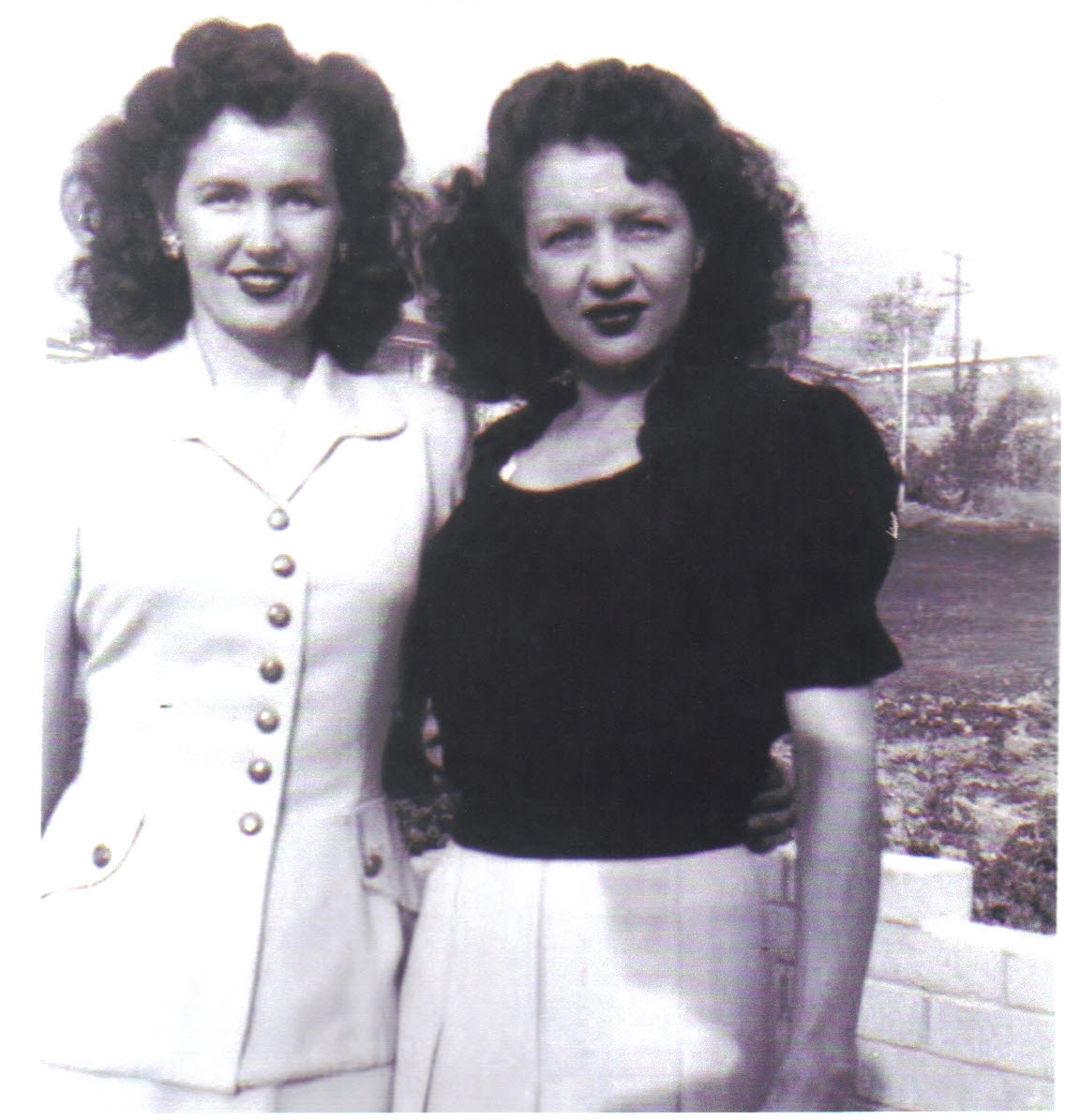 PHYLLIS MOVES TO THE DESERT

This story begins with seemingly unrelated events coming together to cause what happened to happen.

Event number one:
In 1940, when Phyllis was 16, she went with her aunt Margaret to spend a week at McCarthy’s Dude Ranch in the desert. The ranch was located right where Apple Valley Airport is today. Margaret had made the reservations as a result of seeing a brochure which showed a nice ranch house with tall palms lining the driveway in a desert setting.

When they arrived, they saw a large but kind of raunchy house and small straggly palms by the drive, but the desert setting was accurate. They thought: “Oh! This is awful! We’ll just stay one night and leave in the morning,” but by morning they were enchanted with the place. The people’s attitude and the friendliness and informality and the charm of the really authentic ranch living had got to them. They stayed the full week and both of them regarded it as a high point in their lives. Phyllis rode horses and bounced about on the dusty dirt roads in the back of a beat up pickup truck and watched the cowboys do cowboy things and thoroughly enjoyed it.

An aside: Phyllis and I built a house in Apple Valley for George
McCarthy and his second wife, Ruth, sometime in the 60s.

This visit reinforced Phyllis’ love of the desert, which had its beginnings in our “Let’s go to the desert episodes.

Event number two:
Our long time friend, Millie was staying with us because she was pregnant with a child fathered by her boss, Jim Silva, whose wife was dying from cancer. In those days it was not proper for single ladies to be pregnant so she was hiding out with us, using the ruse to her family and friends that she was on a trip. She even had me set the odometer on her car 4,000 miles ahead!

By the way, when Jim Silva’s wife died he and Millie married and had four more children.

Event number three:
One Sunday afternoon, our new acquaintance, Jim Silva and Millie went for a ride in the desert. On the way home Jim was thinking, “I wonder why I bought that lot?”

Jim Silva, who was well off financially, out of the blue sky said, “Brian why don’t you go out there and build me a house on that lot?” My work just happened to be at a place where I could leave, and this was a job and I needed jobs, and Phyllis and I liked the desert, so I said OK. Then I asked Phyllis if it was OK. She was thrilled.

Phyllis and I and the kids came to the desert looking for a place to live while we built the house. There wasn’t any. Not in Apple Valley or Victorville or Hesperia. We finally found a place in Summit Valley about twenty five miles from the job. So we rented it. The house was on 7 acres and it was a partly finished frame house, pretty much complete on the out side, but the inside was bare studs or studs covered with cardboard.

When we moved there from Altadena it was a circus. It was night and Phyllis and Jim were riding in our 39 De Soto with as much stuff as it could haul, including stuff tied on the outside. Margie and I were riding in my old International pickup with a refrigerator and a freezer and a myriad of other things in the back and on the lumber rack; Margie and I and our cat and a whole bunch of other things were in the front.

It went pretty well until we turned off Cajon Pass, but a while after we turned off on the road leading to Summit Valley the lights on my pickup went out. We pulled over to try to find out what was wrong. Pretty soon the lights came back on, so we assumed that the automatic reset, circuit breaker had sensed an overload and turned the lights off, so we continued on our way. In a little while the lights went off again. By this time we were on a little twisty two lane road and I couldn’t see where I was going, so I made a quick stop. We sat and tried to think of a strategy that would allow us to continue on our way. There wasn’t any traffic so we weren’t a hazard. We tried a flashlight out the window, but that was not effective. Then we tried a left turn signal. That lit up the road pretty well during the on flashes, so we pressed on slowly. Now and then the headlights would come on for a while and I would turn the turn signal off until the headlights went off again, so we finally made it to our half finished house.

Phyllis liked this house real well. She liked the way we could use the blocking between the studs for setting ornaments and storing things and she liked living on this big piece of land in this pristine setting. I liked it there too but to run a business from there was challenging. The nearest phones were: A phone booth in Hesperia, about 10 miles from home, where there was usually a train going by so I couldn’t hear, or a phone booth in Crestline, at the top of the mountains, about 10 miles from home in the other direction. Nevertheless, we lived there quite happily while we built this house.

One day while I was working on Jim Silva’s house in Apple Valley, a storm came up and it snowed. When I quit for the day and headed home, it was still snowing and as I gained altitude on the way home. The snow got heavier. Fortunately by now I had improved my truck status and moved up to a four wheel drive Jeep pickup. This truck made it through the snow all right but when I arrived at the front entrance to our property, Phyllis and our neighbor, all bundled up, were standing there with a lantern. They were standing there because the power lines were down, hanging about two feet from the ground because of the weight of the ice which had formed on them and they were afraid that I would run into them. I worked my way around the hanging wires with the truck, I thanked our neighbor, and Phyllis and I rode up the driveway to the house.

It would be impractical to try to work on Silva’s house until the storm was over and at least some of the snow had melted. Phyllis was talking about all of the things we could do while we waited it out. She was going to sew and cook some special meals and on and on.
Well, we couldn’t do anything! When the electricity is off, nothing works. Although we had propane, the heater wouldn’t work without electricity, so we spent what we thought was going to be our good off time, trying to keep warm and eating cold food.

Our water came from a combination of a well with a windmill, and a spring. It was nice soft water.

One day Phyllis’ father, who had been skeptical although supportive of our move to the desert, came to visit us (he called us “pioneers”). He discovered our nice soft water and washed his hair in it.

Phyllis loved her six or seven months in Summit Valley, probably as much as any place she had ever lived, in spite of the shack like house and all of the inconvenience.

While we lived in Summit Valley, Margie, who was in the sixth grade and Jim who was in the first grade, went to a one room school house, where all the elementary grades were taught in one room by one teacher.

By the time we moved to Apple Valley and the kids transferred to Yucca Loma School, Jim had learned so much beyond his grade level that he was a nuisance in class. He already knew all the stuff that they were teaching him and was messing around instead of paying attention.

Our plan was to build this house for Jim Silva and then go back to our nice home in Altadena, but by the time we got the Silva house done we had another house to build, and then another, so we decided to stay. We sold our home in Altadena for $17,000! We eventually found a place to rent in Apple Valley which made working in Apple Valley much easier.

We could not get a phone so we got an answering service. The answering service was at Beaman Plumbing (which was and still is) on Hesperia Road. We made at least one daily trip to get our messages.

We finally got an answering service at Clair Wilcox Realty, right next to our office in Apple Valley. This seemed like it would be the answer to our prayers, but Clair Wilcox was on a ten party line, which included the lumber yard and the local doctor’s office!
By the way the phone numbers at that time were either three digits or four digits. Bank of America was 513.

The long distance service from Apple Valley was almost non-existent, so if we needed to make a long distance call, we would have to drive to the Summit Inn at the top of Cajon Pass, which was on the San Bernardino Exchange. We could get our call through from there.

In these days of cell phones and satellite phones and faxes and e-mail, etc. as well as good land line service, it seems that it would be impossible to do business this way, but it’s what we did.

We did a lot of moving in those early years in Apple Valley, living, according to my count, in 13 houses in 11 years. Most of them were rented. As for the rest of them, there’s a saying that a contractor’s house is always for sale. After all of this jumping around, we lived in the house on Ricaree for 28 years, and in our present home, the Brewster house, for 13 years.

In the early days we did business from home. We finally got an office. Phyllis was planning to sew and do things like that in the back room, while she occasionally answered the phone and such. It didn’t work out that way. She became so busy in the office helping run the business that she never sewed a stitch.

When we decided that we would stay in the desert instead of going back to Altadena, Phyllis thought, “Now we can have some horses and go for rides in the desert.” Phyllis was a horse person and would have loved this. It never happened. We were entirely too busy with both of us devoting our entire time to making the business go, and besides she had a couple of kids to raise. I wish that she could have had her horses.