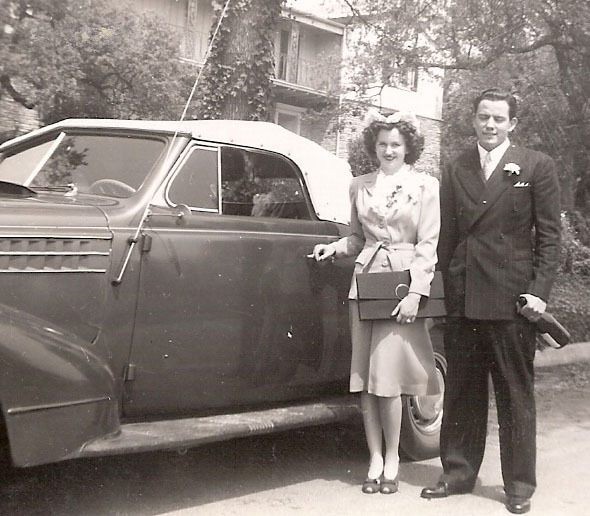 My first meeting with my future father-in-law was handled by me in a less than ideal fashion. Since I was the brother of his ex wife’s husband, Phyllis and I were sure that he would not approve of me. So, on my first visit with Phyllis at her father’s house, I went under an assumed name. It was a stupid idea but it is what I did.

I took Phyllis out and brought her back, and each time I saw him I wondered if he was on to me.

I realized that this was the wrong way to start a relationship, so I wrote him a letter and told him the truth and apologized. He accepted my apology and he seemed to like me, but he still did not think that I was the proper choice for Phyllis. So, after a certain amount of conflict between Phyllis and him, Phyllis moved out and went to live with Joe and Margie (my brother and her mother).

Joe was remodeling the house where he and Marge lived, and Joe had the habit of taking things apart and not putting them back together. So, the only access to Phyllis’s second story loft room was a temporary ladder, because Joe had removed the stairway. When I came to visit Phyllis, I had to climb the ladder. I will say, “The time was worth the climb.”

During this time Phyllis and her father had no contact except that he weekly sent her a 2 dollar allowance. After a couple of months he called her and asked if she would come to his office and go to lunch with him. She did, and he took her out and bought her a lot of new clothes. They were on good terms again, but she still did not want to go back to live in his house because of his objection to me.

Shortly, Phyllis told me that she didn’t want to live this way. She still did not want to go back to her father’s place, because of the conflict over me. I said, “Well, we could get married.” She said, “Oh no.” So I, being a very literal person, presumed that she is not quite ready yet, and I didn’t push it.

The way Phyllis tells the story is that I turned white from sheer terror. I’ll admit that her suggestion sort of took me by surprise, for I had asked her in good faith and I sincerely meant it. She replied, “Oh no!” I had not yet learned that there are certain questions that must be answered negatively before they can be answered positively.

These were the circumstances when Phyllis told her father that she was going to marry me.

When she told her father that we were going to get married, he asked, “What would you do if I said I don’t want you to?” She said, “I would go ahead and marry him anyway.”

He accepted that and gave us a nice wedding and a reception at his associate’s home and paid for our weekend honeymoon at a nice motel in 29 Palms that was owned by one of his clients. By the way: he finally came to realize that I WAS the right guy and we had an excellent relationship.

After one night in this motel, we decided that we wanted more action so we started off towards the Colorado River. We found a shortcut on the map and decided to take it. When we came to the shortcut there was a sign that said, “10 miles of deep sand” but the 100 feet of it that we could see didn’t look so bad, so we took it. She had a dim view of the idea, but after all, I was the man and men know about things like that. I was her new husband, so it must be OK; although, she had helped me dig out before, maybe she just didn’t want to question the judgment of her new husband.

Well, we made about 5 miles. We had to keep going pretty fast to keep from getting stuck, and it was so rough that the doors of the convertible would fly open. I finally slowed down enough that the car sunk in and stopped. So, there we were. Five miles of deep sand in both directions, and cell phones still 50 years in the future.

We decided that if we could get unstuck we better go back, because at least we knew just how bad the road was in that direction. We dug the sand away from the partially submerged tires and using a jack put creosote boughs that we had cut under the rear wheels for traction. And, by repeating this process a few times, we got the car turned around.

Then I told Phyllis, “I’ll drive and you push and if we get going, jump on.” With this process the car started to move. I hollered, “Jump on!” But Phyllis was afraid to. In the mirror I saw her standing there, but I kept going. If I had stopped, the car would have been stuck again. I kept going until I came to a place that was solid enough to get started again. Then I started walking back to her.

When I finally came to Phyllis, she was walking my way with tears streaming down her face. She said that she thought that after one night of marriage I had decided that I didn’t want her. She was mistaken. I knew what I wanted.

An aside: I later got a whole lot better at getting unstuck, and I also learned that I could avoid getting stuck by not going places where we were likely to get stuck. After we were married the need to get to far away places was greatly reduced.

Due to the time lost with our deep sand adventure, we didn’t reach our intended destination that day. So, when we came to a gas station/motel at the side of the lonely road, we decided to stay the night. The owner, an older guy in his forties, told us that they only had three cabins and they were all taken. Some how he found out that we were just married and he burst into action. He said, “We’ll find a place for you.”

They had another unit that they were getting ready and he got busy and cleared it out and put a bed in it and made a place for us.

Then he showed us how to get hot water for a shower. He took us outside to a 55 gallon drum with the top cut out and a coil of copper pipe making 6 or 7 loops around the inside of the drum. There was firewood and kindling nearby. He said, “When you are ready for a shower, build a fire in here and turn on the hot water.” It worked great.

In the morning his wife fixed us breakfast and they ate with us. When we went to pay, they wouldn’t take anything! There are good people.

We got to Flagstaff this second day and Phyllis had gotten quite sunburned especially on her nose from riding in the convertible with the top down.

Flagstaff was little more than a village in those days. We rented an “Auto Court” unit in which the bathing facilities were: a wash tub and a bucket and a stove. You heated the water in the bucket, poured it into the tub, took your bath, then dragged the tub to the door and poured it out.

The third day we started for home. Mid way into the trip the fan belt broke, we were in the middle of nowhere. We had taken a large container of water with us as early desert travelers did, if they had good judgment. We nursed the car along, watching the temperature gauge, letting it boil a little to add to the miles. At the appropriate time we would stop and wait for it to cool and then pour more water in. We finally made it to a place where we could buy a belt.

We got home a day late and I missed a day of work at Lockheed but my supervisors forgave me. After all, newlyweds deserve a little latitude.