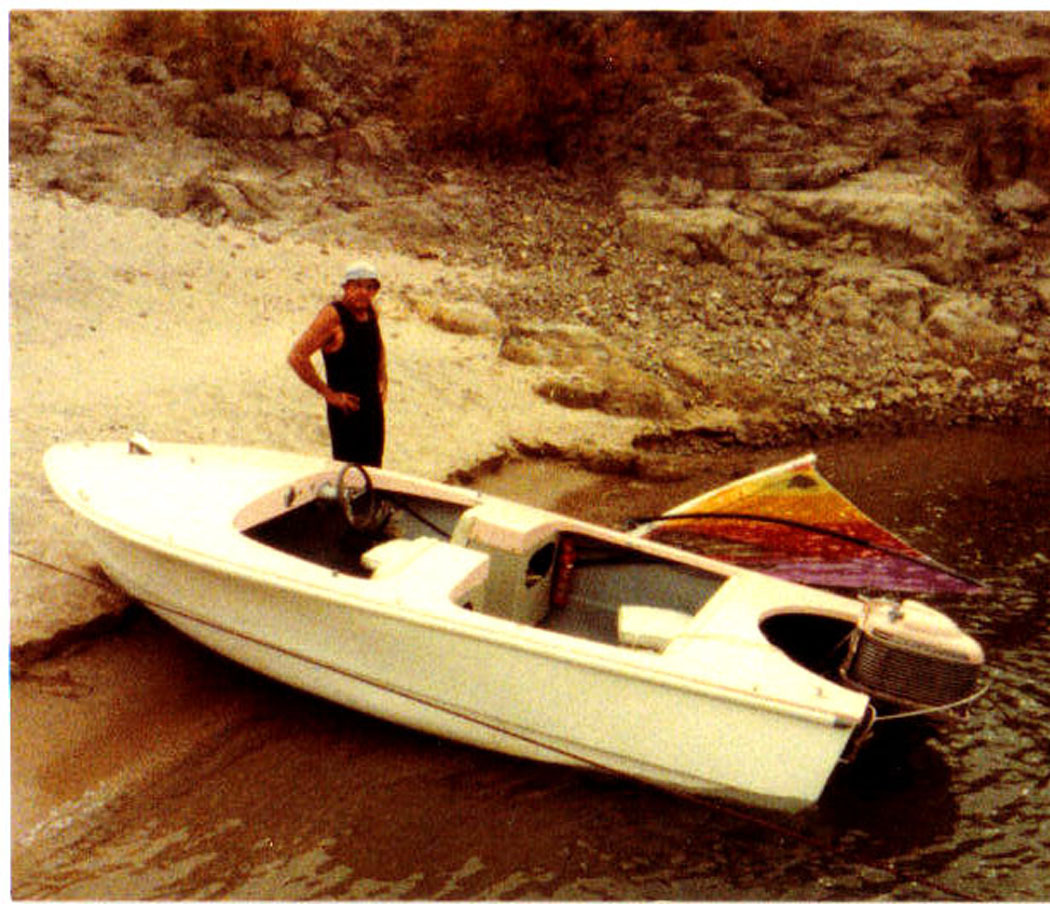 The Boat Was Sinking

This is two stories in one. They tie together. We were water skiing at Lake Isabella with our little P14 with the 45 horse outboard motor. Our skier had fallen and we were motionless in the water, picking up the skier. We noticed a pointy inboard with a V8 engine moving at idle speed toward us.

This boat was getting pretty close to us. The driver called out that his steering was disabled and he had no control. The pointy prow of this boat was now only a few feet from the side of our boat. I didn’t want to put power on our boat to move out of the way because we were picking up a fallen skier.

The driver of the pointy boat stood up and started to climb over his windshield to fend us off. Then he apparently had a better idea. He would just put his boat in reverse and put on a little power. He sat back down in the driver’s seat, moved the shift lever and cracked the throttle. His boat jumped forward! He had failed to get it in reverse!

He apologized all over the place and promised to pay for the damage, which he did, without question, after we got it fixed.

Since he had no steering control, we with our damaged boat, towed his boat to the repair dock! We exchanged names and phone numbers and went our separate ways. We patched up the side of our boat with wood shingles and duct tape and water skied the rest of the week end. The next week Phyllis took our boat on the trailer to the boat factory to be repaired and brought it home good as new.

But! Unbeknown to us the workers at the factory had removed the drain plug from the transom and laid it on the floor, probably so that they could wash the residue from the repair out of the boat. This is the cause of the next part of this two in one story.

I’m sure that the person who neglected to replace the plug had no idea of the adventure and the memories and the story that he had perpetrated.

For our next water skiing outing, we packed the boat with our camp kitchen, food, sleeping bags, water skies, a water disc, life jackets and a multitude of other things intended to meet the needs of the four of us for a weekend campout on the beach.

We launched the boat a little after dark, parked the car and trailer, got in the boat and headed out to find a beach. I was not able to get the boat up on plane because of the heavy load, so we were just kind of mushing along.

The kids in the back seat and Phyllis, who was sitting in the front seat with me, were talking about how low in the water the boat was. I assured them that it was just because of the heavy load. Then they said, “It’s getting lower!” And I said, “It’s OK. When I get it up on plane it will be fine.”

We got to the ramp while the boat was still floating, and I found the plug and put it in. Then I got the car and trailer and backed the trailer in and started to winch the boat onto the trailer. When the boat was about half way on the trailer the winch wouldn’t pull it any farther because it was too heavy with water, so I started the car and pulled the trailer, with the boat half on it, out of the water. Then I pulled the plug and let the water drain out. There was a lot of water in it. I seemed like it took a half hour for all of it to drain out! Without the water in it the winch pulled the boat all the way on the trailer.

While all of this was going on I was reportedly in a pretty bad mood. The family sort of stood back because they were afraid that if they said or did some thing wrong while trying to help I would holler at them. Well, I hollered at them anyway.
As daughter Margie tells it I hollered, “Why are you all just standing there? Can’t you find something to do to help?” They all started scurrying around trying to look busy.

We went to the motel and rented a room. Phyllis and I took a shower and had a drink. We had been feeling pretty hostile during the incident, but sitting there talking about it we began to see the humorous side of it. Pretty soon we were all laughing our heads off about it. This was a nice switch of emotions and all four of us enjoyed it.

After a while we put the kids to bed. Phyllis and I stayed up and talked until the kids went to sleep. Then we went to bed and made love.

In the morning we took the boat out and found a beach and spread our wet things out on the creosote bushes to dry so we would have dry stuff like sleeping bags to sleep in that night and dry clothes to wear home the next day. Then we got on with our water skiing week end.

We ended up with a great memory and a great story to tell.